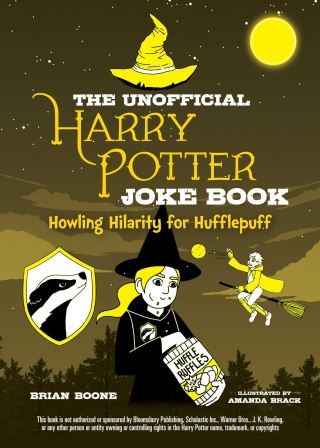 Here are hundreds of hilarious jokes, especially for those who believe that they belong in the esteemed Hogwarts House of Hufflepuff (not Gryffindor, not Ravenclaw, and certainly not Slytherin)

Here are hundreds of hilarious jokes from the Harry Potter world for every muggle, wizard, and squib. The Pottermore website allows Harry Potter fans everywhere to be sorted into the house that’s right for them, and now loyal Hufflepuffs everywhere can find themselves in The Unofficial Harry Potter Jokes Book: Howling Hilarity for Hufflepuff. This fourth book will continue the silly jokes, funny art, and hilarious one-liners specific to the most underrated house of all, and to the wider wizard world.

Jokes include clever lines such as:

At least at first, did Cedric like being in the Triwizard Tournament?
Yeah, he could really Diggory it!

What does a Hufflepuff do after a wand duel?
He huffs and puffs!

What kind of cereal do they serve at Hogwarts?
Hufflepuffs.

Why did Professor Sprout take the Herbology job?
She wanted to get back to her roots.

Knock-knock…Who’s there?
Tonks. Tonks who?
Tonks a lot!

Featuring hundreds of jokes and fifty fantastic illustrations, this joke book provides endless amounts of fun for readers and fans of the bestselling series

Brian Boone: Brian Boone wrote the music trivia (with jokes) book I Love Rock ‘n’ Roll (Except When I Hate It). He is a regular contributor to Funny or Die, Popdose, Splitsider, and The Retroist, and his work has appeared on McSweeney’s Internet Tendency, Adult Swim, The Impersonals, and the Huffington Post.Amanda Brack is also the illustrator of the Creeper Diaries series and the Jokes for Minecrafters series from Sky Pony Press. She has a passion for drawing and illustration, and enjoys the creativity of working on a wide variety of projects in her freelance career. She lives in Boston, Massachusetts.