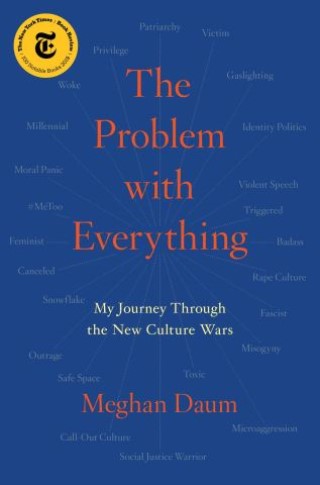 The Problem with Everything

My Journey Through the New Culture Wars

From “one of the most emotionally exacting, mercilessly candid, deeply funny, and intellectually rigorous writers of our time” (Cheryl Strayed, author of Wild) comes a seminal new book that reaches surprising truths about feminism, the Trump era, and the Resistance movement. You won’t be able to stop thinking about it and talking about it.

In the fall of 2016, acclaimed author Meghan Daum began working on a book about the excesses of contemporary feminism. With Hillary Clinton soon to be elected, she figured even the most fiercely liberal of her friends and readers could take the criticisms in stride. But after the election, she knew she needed to do more, and her nearly completed manuscript went in the trash. What came out in its place is the most sharply-observed, all-encompassing, and unputdownable book of her career.

In this gripping new work, Meghan examines our country’s most intractable problems with clear-eyed honesty instead of exaggerated outrage. With passion, humor, and most importantly nuance, she tries to make sense of the current landscape—from Donald Trump’s presidency to the #MeToo movement and beyond. In the process, she wades into the waters of identity politics and intersectionality, thinks deeply about the gender wage gap, and tests a theory about the divide between Gen Xers and millennials.

This signature work may well be the first book to capture the essence of this era in all its nuances and contradictions. No matter where you stand on its issues, this book will strike a chord.

Meghan Daum: Meghan Daum is the author of five books and writes a biweekly column about culture and politics for Medium. Her most recent book is The Unspeakable: And Other Subjects of Discussion, which won the 2015 PEN Center USA Award for creative nonfiction. Her other books include the essay collection My Misspent Youth, and she edited the New York Times bestseller Selfish, Shallow, and Self-Absorbed: Sixteen Writers on the Decision Not to Have Kids. From 2005 to 2016, Daum was an opinion columnist for the Los Angeles Times. She has contributed to numerous magazines, including The New Yorker, The Atlantic, The New York Times Magazine, and Vogue. A recipient of a 2015 Guggenheim Fellowship and a 2016 National Endowment for the Arts Fellowship, she is on the adjunct faculty in the MFA Writing Program at Columbia University School of the Arts.