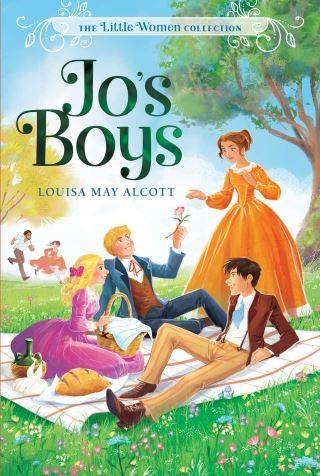 Louisa May Alcott’s enchanting tale of Jo March and her former students concludes with this beautiful keepsake edition of Jo’s Boys, the final novel in the Little Women Collection!

Ten years after Jo opened a school for boys, the little men have grown up and left Plumfield. Now college students, sailors, and musicians, they each explore the world and try to find their place in it. But as they encounter love, disappointment, tragedy, and intrigue, the boys rely on Jo to help them through the challenges they face. Inspired by Alcott’s own experiences, Jo’s Boys brings the classic Little Women series to a close, completing the story that has inspired numerous film adaptations and that touches readers’ hearts as much today as at its original publication.

Louisa May Alcott: Louisa May Alcott was born in 1832 in Germantown, Pennsylvania. She is best known for Little Women (1968), which is loosely based on her own life and proved to be one of the most popular children’s books ever written. Three sequels followed: Good Wives (1869), Little Men (1871), and Jo’s Boys (1886). Alcott was the daughter of the famous transcendentalist Bronson Alcott and was friend of Emerson and Thoreau. In addition to writing, she worked as a teacher, governess, and Civil War nurse, as well as being an advocate of abolition, women’s rights, and temperance. She died in 1888 and is buried in Sleepy Hollow cemetery in Concord, Massachusetts.