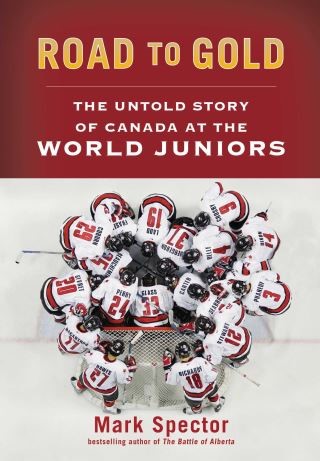 The Untold Story of Canada at the World Juniors

Celebrate another historic gold medal with the behind-the-scenes story of the Canadian World Junior program, from bestselling author Mark Spector.

On the world junior hockey stage today, Canada is known as the team to beat. They hold the record for the most gold medals won (seventeen since the tournament’s inception), their games draws millions of fans each year, and the tournament serves as a showcase for each year’s best talent.

But things weren’t always so rosy. For years, Canada languished in obscurity at the World Juniors. Wearing the red-and-white wasn’t a mark of honour but merely a sideshow to the players, owners resented the interruption to their league operations, and Canada was an afterthought at the tournament. Canada was supposed to be better at hockey than any nation on earth—how could the team languish in such obscurity?

So, the team set out on a reclamation mission. The Program of Excellence was born, and with it, a new hope for hockey’s future in Canada. No more would Canada be content with merely showing up. Instead, each year, the country would send its best talent—from Gretzky to Lemieux to Crosby to McDavid—to reclaim its spot at the top of the hockey world.

Tracing the owner disputes, off-ice antics, and riveting on-ice action of nearly forty years at the World Juniors—and full of inside stories from hockey greats—this is hockey history as you’ve never seen it before. Funny, smart, and clear-eyed, Mark Spector traces the remarkable rise of the Canadian World Junior program and shows how the World Juniors created not just a new team, but a new dream for the sport.

Mark Spector: Mark Spector is a sports journalist for Sportsnet and has been reporting for the Canadian media for over thirty years. His career spans multiple mediums, from having hosted the Mark Spector Show on TEAM 1260, to being an Oilers beat reporter for the Edmonton Journal, to writing a national sports column for the National Post. He has interviewed some of the biggest sporting names of our generation, from Wayne Gretzky and Mark Messier, to Alex Rodriguez and Ichiro Suzuki, and he is the bestselling author of The Battle of Alberta. Mark lives in Edmonton, Alberta. Connect with him on Twitter @SportsnetSpec.