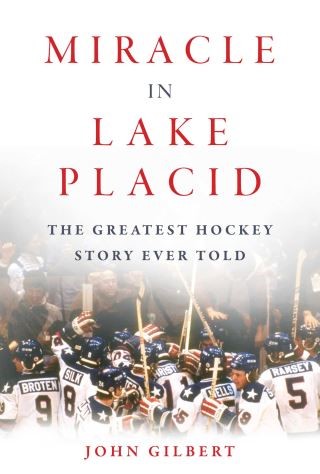 The Greatest Hockey Story Ever Told

Forty years after the "Miracle on Ice" captivated the world, this book deeply examines the impact that singular event had on the people who played and coached in it  and how that game changed the trajectory of American hockey. Seasoned journalist John Gilbert was there every step of the way, and thanks to his detailed recordkeeping, allows readers to reexamine the game against the Soviets, what made it the upset it was, why it still resonates today, and what it did to the lives of the players.

From Mike Eruzione to Jim Craig, Mark Johnson, Buzz Schneider, Jack O’Callahan, Herb Brooks, and many others, Gilbert covers all the key players and leaders and in doing so offers a deeper understanding of the emotions and the strategy, the hows and whys of the actual game, and the impact that moment had on their lives both in the immediate aftermath and today. Gilbert doesn’t miss a beat in uncovering some never-before-told angles and helping expose the ripple effect the event helped create —and how the movie Miracle helped reinvigorate the story and inspire a new generation of players and fans.

To explore the lead-up to one of the greatest moments in American sports and the impact on American morale in the aftermath of the Miracle, Gilbert dives deep into the archives. In doing so he offers a look at this moment unlike it’s ever been done before and helps answer the question as to why it continues to capture our imaginations.

John Gilbert: John Gilbert began his work as a sportswriter with the Duluth News Tribune, before transitioning to a 30-year tenure at the Minneapolis Tribune (later Star Tribune) to cover hockey. He continues to write sports columns and new-car reviews for website Newcarpicks.com, Minnesota Hockey, and The Reader–​Duluth, and has been a radio talk show host. The author of Herb Brooks: The Inside Story of a Hockey Mastermind, Gilbert resides in Duluth, Minnesota.