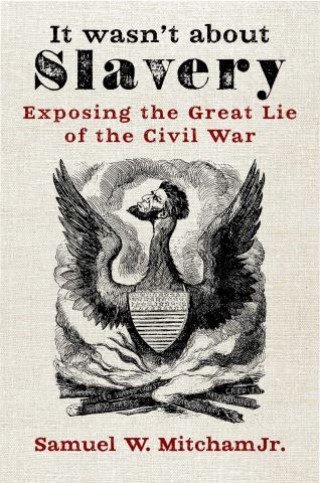 It Wasn't About Slavery

Exposing the Great Lie of the Civil War

The Great Lie of the Civil War

If you think the Civil War was fought to end slavery, you’ve been duped.

In fact, as distinguished military historian Samuel Mitcham argues in his provocative new book, It Wasn’t About Slavery, no political party advocated freeing the slaves in the presidential election of 1860. The Republican Party platform opposed the expansion of slavery to the western states, but it did not embrace abolition.

The real cause of the war was a dispute over money and self-determination.

Yet, most federal government spending and subsidies benefited the North. The South wanted a more limited federal government and lower tariffs—the ideals of Thomas Jefferson—and when the South could not get that, it opted for independence.

Lincoln was unprepared when the Southern states seceded, and force was the only way to bring them—and their tariff money—back. That was the real cause of the war.

A well-documented and compelling read by a master historian, It Wasn’t About Slavery will change the way you think about Abraham Lincoln, the Emancipation Proclamation, and the cause and legacy of America’s momentous Civil War.

Samuel W. Mitcham: Samuel W. Mitchum Jr. is a former professor at the University of Louisiana at Monroe who has taught at West Point. He is the author of more than forty books, including Bust Hell Wide Open: The Life of Nathan Bedford Forrest, Vicksburg: The Bloody Siege that Turned the Tide of the Civil War, and Desert Fox: The Storied Military Career of Erwin Rommel. He was a U.S. Army helicopter pilot during the Vietnam War and is qualified through the rank of major general. He lives in Monroe, Louisiana.