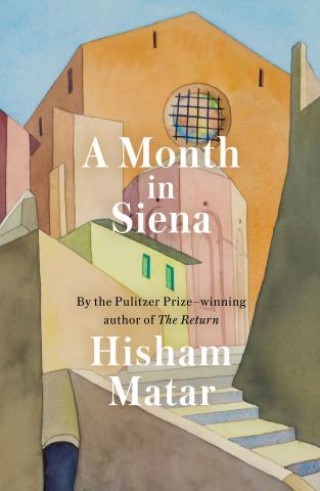 A Month in Siena

From the Pulitzer Prize–winning author of The Return comes a profoundly moving contemplation of the relationship between art and life.

After finishing his powerful memoir The Return, Hisham Matar, seeking solace and pleasure, traveled to Siena, Italy. Always finding comfort and clarity in great art, Matar immersed himself in eight significant works from the Sienese School of painting, which flourished from the thirteenth to the fifteenth centuries. Artists he had admired throughout his life, including Duccio and Ambrogio Lorenzetti, evoke earlier engagements he’d had with works by Caravaggio and Poussin, and the personal experiences that surrounded those moments.

Including beautiful full-color reproductions of the artworks, A Month in Siena is about what occurred between Matar, those paintings, and the city. That month would be an extraordinary period in the writer’s life: an exploration of how art can console and disturb in equal measure, as well as an intimate encounter with a city and its inhabitants. This is a gorgeous meditation on how centuries-old art can illuminate our own inner landscape—current relationships, long-lasting love, grief, intimacy, and solitude—and shed further light on the present world around us.

Praise for A Month in Siena

“As exquisitely structured as The Return, driven by desire, yearning, loss, illuminated by the kindness of strangers. A Month in Siena is a triumph.”—Peter Carey

Hisham Matar: Hisham Matar is the Pulitzer Prize–winning author of the memoir The Return, which also received the PEN/Jean Stein Award and other international prizes, and was selected as one of The New York Times’s Ten Best Books of the Year. His debut novel, In the Country of Men, was shortlisted for the Man Booker Prize and won several awards, including the Royal Society of Literature Ondaatje Prize and a Commonwealth First Book Award. His second novel, Anatomy of a Disappearance, was selected as one of the best books of the year by several publications, including the Chicago Tribune and The Guardian. He was elected as a Fellow of the Royal Society of Literature in 2013. Born in New York City to Libyan parents, he spent his childhood in Tripoli and Cairo and now divides his time between London and New York, where he teaches literature at Barnard College, Columbia University.