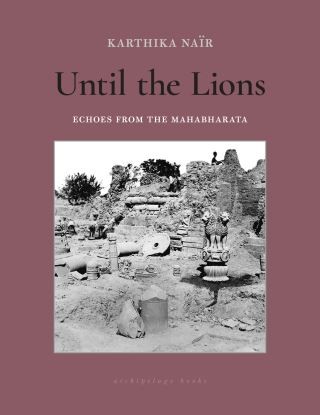 Echoes from the Mahabharata

A dazzling and eloquent reworking of the Mahabharata, one of South Asia's best-loved epics, through nineteen peripheral voices. With daring poetic forms, Karthika Naïr breathes new life into this ancient epic.

Karthika Naïr refracts the epic Mahabharata through the voices of nameless soldiers, outcast warriors and handmaidens as well as abducted princesses, tribal queens, and a gender-shifting god. As peripheral figures and silent catalysts take center stage, we get a glimpse of lives and stories buried beneath the dramas of god and nation, heroics and victory - of the lives obscured by myth and history, all too often interchangeable. Until the Lions is a kaleidoscopic, poetic tour de force. It reveals the most intimate threads of desire, greed, and sacrifice in this foundational epic.

Karthika Nair: French-Indian, poet-dance producer/curator, Karthika Naïr is the author of several books, including The Honey Hunter, illustrated by Joëlle Jolivet and published in English, French, German and Bangla. Until the Lions: Echoes from the Mahabharata, her reimagining of the Mahabharata in multiple voices, won the 2015 Tata Literature Live! Award for Book of the Year (Fiction). Her latest book is the collaborative Over and Under Ground in Mumbai & Paris, a travelogue in verse, written with Mumbai-based poet Sampurna Chattarji, and illustrated by Joëlle Jolivet and Roshni Vyam. Naïr was also the principal scriptwriter of the multiple-award-winning DESH (2011), choreographer Akram Khan's dance solo; its family show-version; Chotto Desh (2015) and Until the Lions, Khan's adaptation of one of the chapters of her book. As a dance enabler, her closest association has been with Sidi Larbi Cherkaoui and Damien Jalet as executive producer of works like Three Spells, Babel (Words), Puz/zle and Les Médusés, and as co-founder of Cherkaoui's company, Eastman.