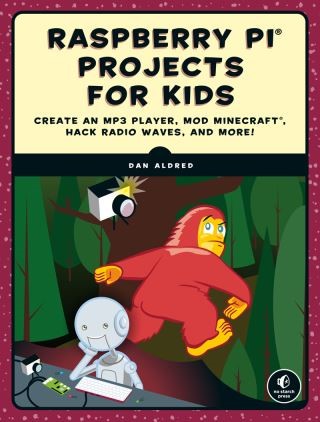 Learn coding and electronics through 12 original and daring projects that hack wireless signals.

The Raspberry Pi is an inexpensive, pocket-sized computer that will help you build and code your own hardware projects.

Raspberry Pi Projects for Kids will show you how to harness the power of the Raspberry Pi to create 12 cool projects using simple code and common materials like a webcam, microphone, and LED lights. Step-by-step instructions and detailed diagrams guide you through each project.

After a brief introduction to the Python programming language, you'll learn how to:

Raspberry Pi Projects for Kids will deliver hours of fun and endless inspiration!

Dan Aldred: Dan Aldred is a Computer Science teacher, freelance writer, and hacker. He has championed the use of the Raspberry Pi as a tool for learning and creativity, and is a Raspberry Pi Certified Educator. Aldred led the winning team of students for the first Astro Pi competition whose code is now orbiting Earth aboard the International Space Station. He currently lives in the United Kingdom.