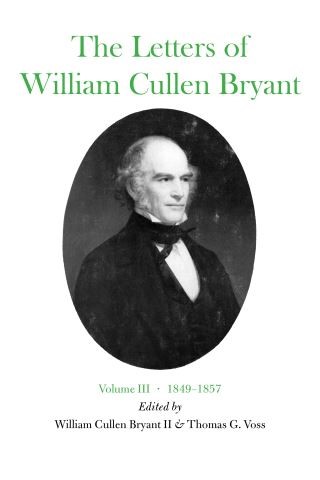 The Letters of William Cullen Bryant

During the years covered in this volume, Bryant traveled more often and widely than at any comparable period during his life. The visits to Great Britain and Europe, a tour of the Near East and the Holy Land, and excursions in Cuba, Spain, and North Africa, as well as two trips to Illinois, he described in frequent letters to the Evening Post. Reprinted widely, and later published in two volumes, these met much critical acclaim, one notice praising the "quiet charm of these letters, written mostly from out-of-the-way places, giving charming pictures of nature and people, with the most delicate choice of words, and yet in the perfect simplicity of the true epistolary style."

His absence during nearly one-fifth of this nine-year period reflected the growing prosperity of Bryant's newspaper, and his confidence in his editorial partner John Bigelow and correspondents such as William S. Thayer, as well as in the financial acumen of his business partner Isaac Henderson. These were crucial years in domestic politics, however, and Bryant's guidance of Evening Post policies was evident in editorials treating major issues such as the Compromise of 1850, the Fugitive Slave Law, the Kansas-Nebraska Bill, the rise of the Republican Party, and the Dred Scott Decision, as well as in his correspondence with such statesmen as Salmon P. Chase, Hamilton Fish, William L. Marcy, Edwin D. Morgan, and Charles Sumner. His travel letters and journalistic writings reflected as well his acute interest in a Europe in turmoil. In France and Germany he saw the struggles between revolution and repression; in Spain he talked with journalists, parliamentary leaders, and the future president of the first Spanish republic; in New York he greeted Louis Kossuth and Giuseppe Garibaldi.

Bryant's close association with the arts continued. He sat for portraits to a dozen painters, among them Henry P. Gray, Daniel Huntington, Asher Durand, Charles L. Elliott, and Samuel Laurence. The landscapists continued to be inspired by his poetic themes. Sculptor Horatio Greenough asked of Bryant a critical reading of his pioneering essays on functionalism. His old friend, the tragedian Edwin Forrest, sought his mediation in what would become the most sensational divorce case of the century, with Bryant and his family as witnesses. His long advocacy of a great central park in New York was consummated by the legislature. And in 1852, his eulogy on the life of James Fenimore Cooper became the first of several such orations which would establish him as the memorialist of his literary contemporaries in New York.