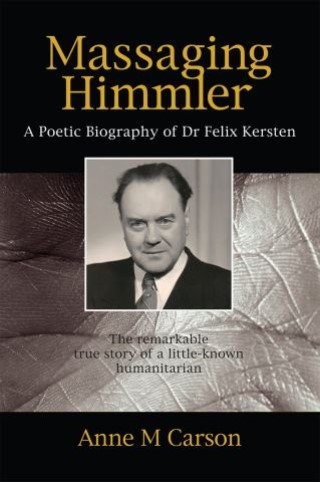 Set in Nazi Germany, Massaging Himmler: A Poetic Biography of Dr Felix Kersten tells in verse the remarkable story of a little-known humanitarian. Kersten was a Finnish-born therapeutic masseur who found himself at the centre of the Nazi web, treating Reichsführer Heinrich Himmler (head of the SS and the Gestapo) for stomach cramps, which sometimes rendered him unconscious, and which no other practitioner could relieve. Dr Kersten massaged Himmler daily during the war, sometimes in multiple treatments. He took no fee for his services to the Reichsführer, but used his influence to secure the release of tens of thousands of prisoners. Accused of collaboration at the end of the war, he worked tirelessly to clear his name, and received high honours from several European countries. Told in compelling language, from multiple points of view, this is an important addition to Holocaust literature. Dr Kersten's story shows how one man, flawed like the rest of us, was able to make a difference. "...Carson's poems race ahead of the reader, like stampeding horses, the furious pace mirroring the horror of their context. Art Spiegelman's graphic novel, Maus, pushed the boundaries of Holocaust literature, and I believe Massaging Himmler: A Poetic Biography of Dr Felix Kersten, is in that class." - Adele Hulse, Coordinator, Write Your Story program, Makor Publishing, Lamm Jewish Library of Australia.