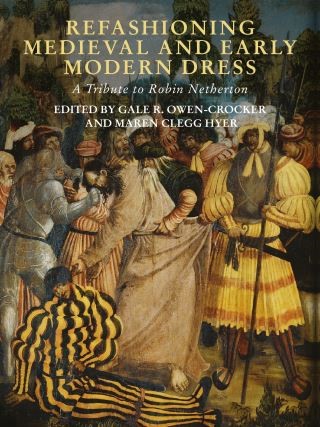 A Tribute to Robin Netherton

All those who work with historical dress and textiles must in some way re-fashion them. This fundamental concept is developed and addressed by the articles collected here, ranging over issues of gender, status and power. Topics include: the repurposing and transformation of material items for purposes of religion, memorialisation, restoration and display; attempts to regulate dress, both ecclesiastical and secular, the reasons for it and the refashioning which was both a result and a reaction; conventional ways in which dress was used to characterise children, and their transition into young men; how symbolism-laded dress items could indicate political/religious affiliations; ways in which allegorical, biblical and historical figures were depicted in art in dress familiar to the viewers of their own era, and the emotive and intellectual responses to these costumes the artists sought to elicit; and the use of clothing in medieval literature (often rich, exotic or unique) as narrative, structuring and rhetorical devices. Taken together, they honour the costume historian and editor Robin Netherton, who has been hugely influential in the development of medieval and Renaissance dress and textile studies. GALE R. OWEN-CROCKER is Professor Emerita at the University of Manchester; MAREN CLEGG HYER is Professor of English at Valdosta State University, Contributors: Melanie Schuessler Bond, Elizabeth Coatsworth, Lisa Evans, Gina Frasson-Hudson, Charney Goldman, Sarah-Grace Heller, Maren Clegg Hyer, John Friedman, Thomas Izbicki, Drea Leed, Christine Meek, M.A. Nordtorp-Madson, Gale R. Owen-Crocker, Lucia Sinisi, Monica L. Wright.