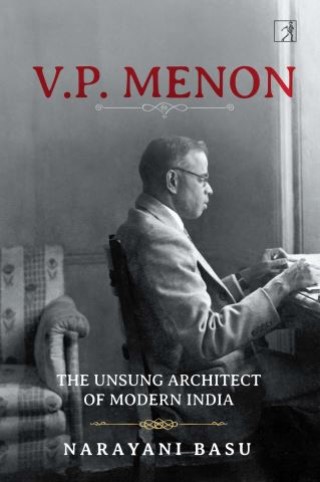 The Unsung Architect of Modern India

With his initial plans for an independent India in tatters, the desperate viceroy, Lord Mountbatten, turned to his seniormost Indian civil servant, Vappala Pangunni Menon—or VP—giving him a single night to devise an alternative, coherent and workable plan for independence. Menon met his stringent deadline, presenting the Menon Plan, which would change the map of the world forever.
Menon was unarguably the architect of the modern Indian state. Yet startlingly little is known about this bureaucrat, patriot and visionary. In this definitive biography, Menon’s great-granddaughter, Narayani Basu, rectifies this travesty. She takes us through the highs and lows of his career, from his determination to give women the right to vote; to his strategy, at once ruthless and subtle, to get the princely states to accede to India; to his decision to join forces with the Swatantra Party; to his final relegation to relative obscurity.
Equally, the book candidly explores the man behind the public figure— his unconventional personal life and his private conflicts, which made him channel his energy into public service. Drawing from documents—scattered, unread and unresearched until now—and with unprecedented access to Menon’s papers and his taped off-the-record and explosively frank interviews—this remarkable biography of VP Menon not only covers the life and times of a man unjustly consigned to the footnotes of history but also changes our perception of how India, as we know it, came into being.

Narayani Basu:
Narayani Basu is a historian and foreign policy analyst. A graduate in history and Chinese foreign policy from the University of Delhi, she is the author of The United States and China: Competing Discourses of Regionalism in East Asia and a forthcoming monograph on the history and significance of the Kashgar Consulate in bilateral relations between India and China. She writes extensively on foreign policy for several acclaimed international journals while remaining actively involved with her parent discipline—modern Indian history. She lives in New Delhi.