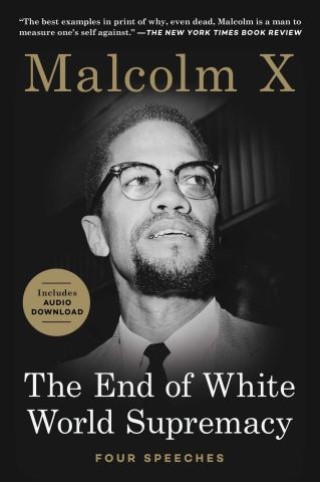 The End of White World Supremacy

The classic collection of major speeches, now bundled with an audio download of Malcolm X delivering two of them.

Malcolm X remains a touchstone figure for black America and in American culture at large. He gave African Americans not only their consciousness but their history, dignity, and a new pride. No single individual can claim more important responsibility for a social and historical leap forward such as the one sparked in America in the sixties. When, in 1965, Malcolm X was gunned down on the stage of a Harlem theater, America lost one of its most dynamic political thinkers. Yet, as Michael Eric Dyson has observed, “he remains relevant because he spoke presciently to the issues that matter today: black identity, the politics of black rage, the expression of black dissent, the politics of black power, and the importance of consolidating varieties of expressions within black communities—different ideologies and politics—and bringing them together under a banner of functional solidarity.”

The End of White World Supremacy contains four major speeches by Malcolm X, including: “Black Man's History,” “The Black Revolution,” “The Old Negro and the New Negro,” and the famous “The Chickens Are Coming Home to Roost” speech ("God's Judgment of White America"), delivered after the assassination of John F. Kennedy. Several of the speeches include a discussion with the moderator, among whom Adam Clayton Powell, or a question-and-answer with the audience. This new edition bundles with the book an audio download of Malcolm's stirring delivery of “Black Man's History” in Harlem's Temple No.7 and “The Black Revolution” in the Abyssinian Baptist Church.

Malcolm X: Malcolm X was an important, polarizing figure of the Civil Rights Movement. Born in 1925 in Omaha, Nebraska, he became a key force in bringing America's racial issues to the government's attention. He was assassinated in 1965 in New York City.Imam Benjamin Karim was a close associate and collaborator of Malcolm from 1957 until his Malcolm's death. As Benjamin 2X, he was an assistant minister of Temple No.7 in Harlem for four years. It was Imam Benjamin Karim who "opened up" for Malcolm when he was killed by assassin's bullets in February 1965. Imam Karim lived in Richmond, Virginia, until his death in 2005.