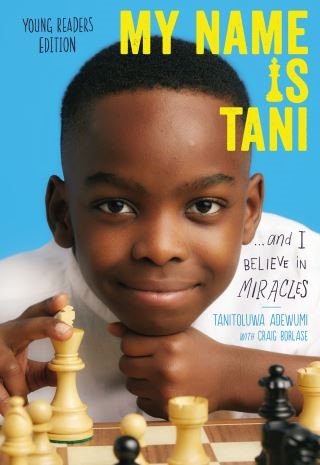 My Name Is Tani . . . and I Believe in Miracles Young Readers Edition

At eight years old, Tani Adewumi, a refugee, won the 2019 New York State Chess Championship after playing the game for only a year--and while homeless.

Tani and his family fled Boko Haram's reign of terror in Nigeria to come to the United States, where they lived in a New York City homeless shelter while waiting to be granted religious asylum. Tani began attending a public elementary school and decided he wanted to join the chess program, but it required a fee. Tani's mother reached out to the coach, who offered Tani a scholarship--and a year later the young immigrant became a chess champion.

Ideal for readers 8 to 12 years old, this adaptation presents compelling insight into:

Tani Adewumi is the eight-year-old Nigerian-born boy who recently won the NY State Chess Championship after playing the game for only a year. Tani and his family’s story begins amidst Boko Haram’s reign of terror in their native country of Nigeria and takes them to a New York City homeless shelter, where they waited to be granted religious asylum. Tani’s father, who came from a royal Nigerian family, became a dishwasher and Uber driver to support his family. His mother, whose family owned the largest printing press in Nigeria and had been working at a bank for over a decade, trained to become a home-aid. So, when Tani asked to join the chess program at PS 116, which required a fee, it seemed unlikely. His mother wrote to the coach, who offered Tani a scholarship. Miracles led Tani and his family to New York. As Tani’s father puts it, “There are many times in my life where I thought this must be the miracle and yet, I did not know that the miracle had not yet begun.”

Craig Borlase (craigborlase.com) is a bestselling British author and collaborative writer of more than 45 books. He specializes in memoir, and his most recent book is the New York Times bestseller Finding Gobi with Dion Leonard.