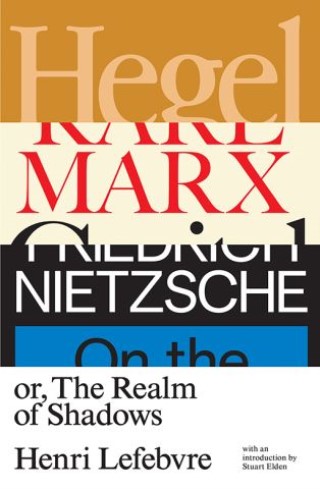 Or the Realm of Shadows

With the translation of Lefebvre's philosophical writings, his stature in the English-speaking world continues to grow. Though certainly within the Marxist tradition, he consistently saw Marx as an 'unavoidable, necessary, but insufficient starting point'. Unsurprisingly, Lefebvre always insisted on the importance of Hegel to understanding Marx. But the imposing Metaphilosophy also suggested the significance he ascribed to Nietzsche, in the 'realm of shadows' through which philosophy seeks to think the world. Lefebvre proposes here that the modern world is at the same time Hegelian in terms of the state; Marxist in terms of the social and society; and Nietzschean in terms of civilization and its values. As early as 1939, Lefebvre pioneered a French reading of Nietzsche that rejected the philosopher's appropriation by fascism, bringing out the tragic implications of Nietzsche's proclamation that 'God is dead' long before this approach was followed by such later writers as Foucault, Derrida and Deleuze. Forty years later, in the last of his philosophical writings, Lefebvre juxtaposes the contributions of the three great thinkers, in a text whose themes remain surprisingly relevant today.

Henri Lefebvre: Henri Lefebvre (1901-1991), former resistance fighter and professor of sociology at Strasbourg and Nanterre, was a member of the French Communist Party from 1928 until his expulsion in 1957. He was the author of sixty books on philosophy, sociology, politics, architecture and urbanism.