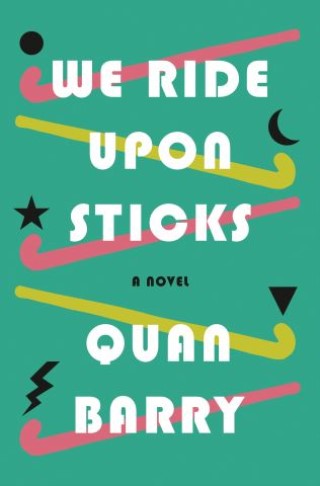 We Ride Upon Sticks

"We Ride Upon Sticks . . . is for the kind of adults who watch Stranger Things and still have, somewhere, an athletic award inscribed on a paper plate." —NPR

Acclaimed novelist Quan Barry delivers a tour de female force in this delightful novel. Set in the coastal town of Danvers, Massachusetts, where the accusations began that led to the 1692 witch trials, We Ride Upon Sticks follows the 1989 Danvers High School Falcons field hockey team, who will do anything to make it to the state finals—even if it means tapping into some devilishly dark powers. In chapters dense with 1980s iconography—from Heathers to "big hair"—Barry expertly weaves together the individual and collective progress of this enchanted team as they storm their way through an unforgettable season.

Helmed by good-girl captain Abby Putnam (a descendant of the infamous Salem accuser Ann Putnam) and her co-captain Jen Fiorenza (whose bleached blond “Claw” sees and knows all), the Falcons prove to be wily, original, and bold, flaunting society's stale notions of femininity in order to find their glorious true selves through the crucible of team sport and, more importantly, friendship.

Quan Barry: Raised in the coastal town of Danvers, Massachusetts, QUAN BARRY is the author of the novel She Weeps Each Time You’re Born and of four books of poetry, including the collection Water Puppets, which won the AWP Donald Hall Prize for Poetry and was a PEN Open Book finalist. She lives in Wisconsin and teaches at the University of Wisconsin–Madison.