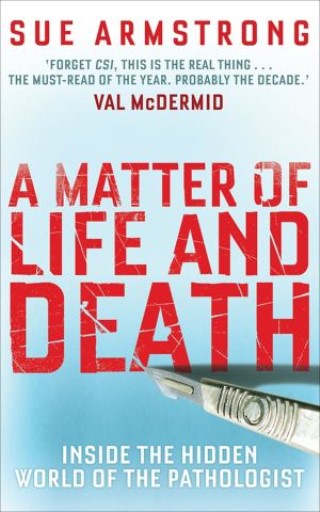 A Matter of Life and Death

Inside the Hidden World of the Pathologist

True tales of microscopic detective work that catches killers both human and pathogen: “More fascinating than fiction. Forget CSI, this is the real thing” (Val McDermid).

A Matter of Life and Death profiles some of the world’s most eminent and pioneering pathologists. This is a hidden world, yet one we will all inevitably encounter at some time in our lives, for pathology lies at the cornerstone of modern medicine. It is pathologists who are responsible for recognizing new diseases such as AIDS, SARS or bird flu, and for diagnosing which cancer a patient is suffering from. Beyond this, it is pathologists who must explain the cause of death at the autopsy table.

A Matter of Life and Death tells fascinating stories of mysterious illnesses and miraculous scientific breakthroughs. But it is also crammed full of extraordinary characters - from the forensic anthropologist with his own Body Farm in Tennessee to the doctor who had a heart-and-lung transplant and ended up using her own lungs for research.

“If you’re interested in criminal investigation, this is the must-read of the year. Probably of the decade.” —Val McDermid, author of Insidious Intent