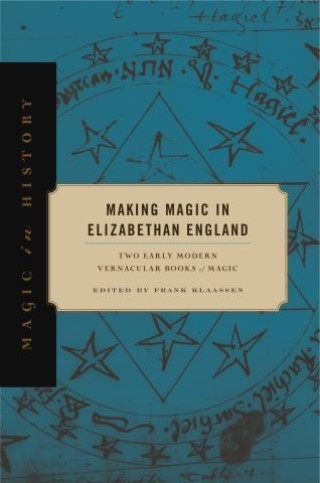 This volume presents editions of two fascinating anonymous and untitled manuscripts of magic produced in Elizabethan England: the Antiphoner Notebook and the Boxgrove Manual. Frank Klaassen uses these texts, which he argues are representative of the overwhelming majority of magical practitioners, to explain how magic changed during this period and why these developments were crucial to the formation of modern magic.

The Boxgrove Manual is a work of learned ritual magic that synthesizes material from Henry Cornelius Agrippa, the Fourth Book of Occult Philosophy, Heptameron, and various medieval conjuring works. The Antiphoner Notebook concerns the common magic of treasure hunting, healing, and protection, blending medieval conjuring and charm literature with materials drawn from Reginald Scot’s famous anti-magic work, Discoverie of Witchcraft. Klaassen painstakingly traces how the scribes who created these two manuscripts adapted and transformed their original sources. In so doing, he demonstrates the varied and subtle ways in which the Renaissance, the Reformation, new currents in science, the birth of printing, and vernacularization changed the practice of magic.

Illuminating the processes by which two sixteenth-century English scribes went about making a book of magic, this volume provides insight into the wider intellectual culture surrounding the practice of magic in the early modern period.