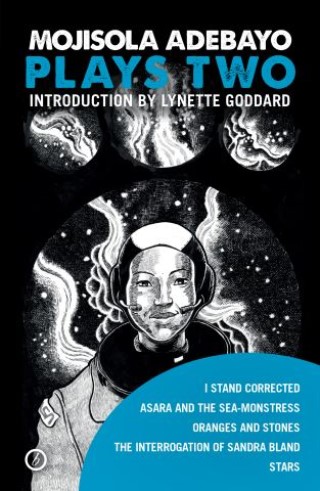 ‘These five plays represent the diverse scope and content of Mojisola’s work, and demonstrate an ongoing commitment to an artistic practice that is both stylistically innovative and politically astute.’ – Lynette Goddard, from her introduction

The plays collected here showcase Adebayo’s varied talents through her unflinching political writing about race, gender, sex and sexuality, feminist history and politics. With settings spanning from South Africa to the Middle East, the United States, a mythical kingdom, South London and outer space, the five plays included are:

I Stand Corrected: a soulful artistic response to the phenomenon of ‘corrective’ hate rape and murder of lesbians and trans men in South Africa

Asara and the Sea-Monstress: a play for young people about a left-handed girl growing up in a mythical right-handed Kingdom

Oranges and Stones (previously 48 Minutes for Palestine): an exploration of one woman’s life under occupation in Palestine

The Interrogation of Sandra Bland: a verbatim play transcribing the dash cam recording of Sandra Bland’s arrest into a choral performance by black women

STARS: a space odyssey telling the story of a very old lady who goes into outer space in search of her own orgasm