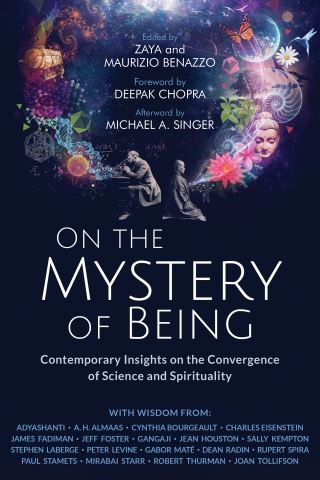 On the Mystery of Being

Contemporary Insights on the Convergence of Science and Spirituality

With this dazzling collection of essays, the founders of the expanding Science and Nonduality (SAND) conference bring together a wide array of visionary spiritual leaders, psychologists, philosophers, scientists, teachers, authors, and healers to celebrate and explore what it means to be human.

Zaya Benazzo:
Zaya Benazzo is a filmmaker from Bulgaria with degrees in engineering, environmental science, and film. For many years, she worked as an environmental activist in Holland and Bulgaria, and later produced and directed several award-winning documentaries in Europe and the United States.
Maurizio Benazzo grew up in Italy, and in 1984 came to the United States on a ninety-eight-year-old sailing boat. He started working as an actor, model, and filmmaker, but his thirst for knowledge was only satisfied in 2001 upon encountering I Am That, the seminal work by Sri Nisargadatta Maharaj, while he was in India shooting the award-winning documentary Short Cut to Nirvana.
Deepak Chopra is author of more than seventy books, including numerous New York Times bestsellers. His medical training is in internal medicine and endocrinology.

Michael A. Singer is author of the #1 New York Times bestseller, The Untethered Soul, and the New York Times bestseller, The Surrender Experiment, which have both been published worldwide. He had a deep inner awakening in 1971 while working on his doctorate in economics, and went into seclusion to focus on yoga and meditation. In 1975, he founded Temple of the Universe, a now long-established yoga and meditation center where people of any religion or set of beliefs can come together to experience inner peace. He is also creator of a leading-edge software package that transformed the medical practice management industry, and founding CEO of a billion-dollar public company whose achievements are archived in the Smithsonian Institution. Along with his more than four decades of spiritual teaching, Singer has made major contributions in the areas of business, education, health care, and environmental protection. He previously authored two books on the integration of Eastern and Western philosophy: The Search for Truth and Three Essays on Universal Law. Visit www.untetheredsoul.com for more information.