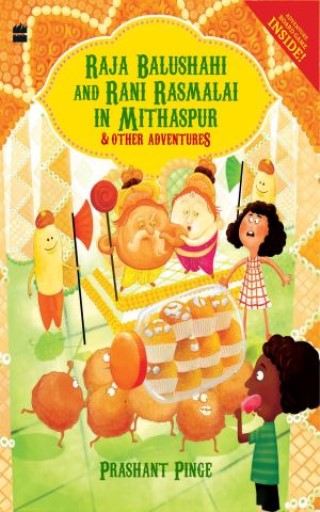 Raja Balushahi and Rani Rasmalai in Mithaspur and Other Adventures

For the two young siblings, eleven-year-old Arjun and nine-year-old Anindita, what starts out as a boring vacation at their grandparents' house, turns into a grand adventure after they stumble upon an enchanted laddoo that takes them to the magical land of Chamatkar Nagri. Starting with Mithaspur, where Raja Balushahi awaits his fate at the hands of his arch nemesis, Krooradasa, the children are thrust into one exciting escapade after another - from facing evil jadugars and solving ancient mysteries to rescuing mythical creatures and finding lost treasures. A thrilling adventure that will immerse you into a world of fantasy, filled with captivating magic and unexpected dangers. Beautifully illustrated, this book comes with a pull-out board game!

Prashant Pinge: Prashant Pinge loves stringing words together to create enchanting stories for children. He also utterly disregards reality. Little wonder then that he prefers residing in sixteenth-century England next to the Bard's house, where he spends his days in the company of his characters and nights taming wild dragons.